This post specifically talks about running and startups, but I think this ethos applies broadly. It goes without saying that having the choice to do things for “the right reasons” is a privilege. I’m very thankful for my immigrant parents whose “why” was just to give me this choice.

We often ask What?: “What are you training for?” or “What does your startup do?”, but we rarely ask Why?. Obviously, Why?s are much more complex, and this post isn’t going to give you any answers, but hopefully will get you to stop and think about your own Why?s more often. Why? Because it’s important to do things for the right reasons.

For a year or two until this past year, I was running for the wrong reasons. I was still setting personal records (PRs) and enjoying the results, but I was running scared and running angry. I was running away from past demons. I was running hoping that with each passing step, I was getting further away from an injury, from the end of a relationship, from the past failures. Putting miles between me and all these things I didn’t want to face or better yet, somehow metaphorically conquering them. I was running to beat people to prove that I was as just as fast as them, or faster. I was running to prove myself to others or to put myself above others. I would show up to group runs and subconsciously size everyone up to see who I was faster or wasn’t faster than.

You can’t outrun negativity. Negativity is like Father Time or the dreaded bonk1 during a hilly long run on a hot day without any water or nutrition. Life is too long to run scared—negativity always catches up to you. It’s up to you whether you let it completely consume and break you, or if you accept it, give it a big hug and turn it into something positive.

Luckily, I recognized some of these unhealthy feelings and thoughts and wanted to make a change. About a year ago, I read an amazing book entitled “The Happy Runner” by David and Megan Roche and really resonated with it. I slowly tried to rewire those negative thoughts in my head. It made me stop to think about my Why?. In my journey to figure that out, I was lucky enough to have David Roche agree to coach me. I’m committed to the process of embracing the happy runner mindset.

What does it mean to run happy? I feel like I can run to win, but not to beat anyone or prove anything to anyone. Rather, I run to push and be pushed by other amazing human beings. I run to win my own battles while cheering on others as they fight their own battles. To learn and love everyone’s stories and journeys—and wow, you hear some really, really amazing stories. I run to uplift communities and be a part of communities. To inspire and be inspired. As David and Megan put it best: “It’s essential to have a ‘why’ that stands up to the worst times, and doesn’t just anticipate the good ones.” 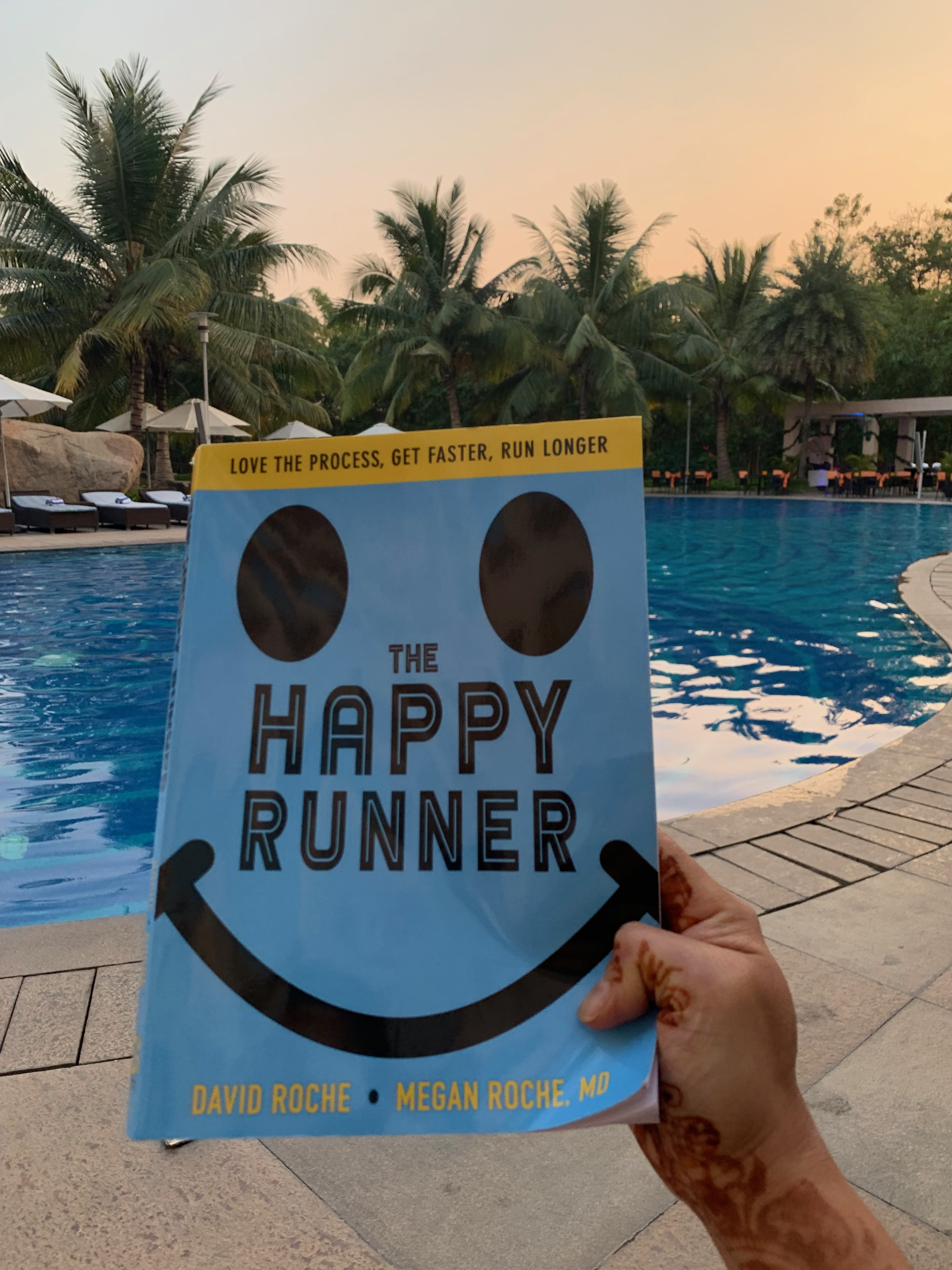 Reading "The Happy Runner" poolside at Shravan and Stuthi's wedding in Hyderabad, December 2018

From the outside, you may not be able to tell apart someone running for the wrong reasons or the right reasons. Maybe it’s like the Force and the Sith or the Yin and the Yang. Two sides of the same coin, always in careful balance. You can be equally motivated by the right reasons or the wrong reasons. Moreover, fear or anger can be a more powerful motivator for getting you out the door on training runs. Nevertheless, I seem to notice that when the going gets tough, if you’re running for the wrong reasons, negativity tends to come out. During mile 21 or 22 of the marathon, those negative thoughts start to overwhelm you with every stride. The things you were running from catch up to you. You get tunnel vision and stop appreciating the day, the race, the sport, and all the hard work you put into training. You start questioning why you didn’t train more or why the weather wasn’t better or why that aid station volunteer didn’t hold that cup of water better for you.

In contrast, if you’re running for the right reasons, that tends to come out during the toughest times too. Coach Roche loves to tell his athletes, “envision the IMPERFECT day” and “embrace the suckitude”. When things get tough, rather than wallow, throw myself a pity party, or question everything, I try to smile, laugh at this utterly ridiculous situation where I’m upset about suffering that I voluntarily signed up for and even paid for, and try to make the most out of it. It’s possible to do this because I know this race isn’t the be-all and end-all— it’s just a checkpoint in the process I’ve embraced.

This doesn’t just apply to running of course. My co-founder Ricky and I have talked a lot about “mindset upgrades” and “mindset inequalities”. I think I noticed a similar mindset when I was first starting a company— I wasn’t sure if I could really articulate a good “why”. Coming from my background, I wanted to prove myself and prove that I was good enough to do this really hard thing. But having a chip on your shoulder2 is good until you let the woodchip grow into a tree and start challenging everyone and everything to a fight. Coming from an underdog mentality, if you’re not careful, you quickly tip over from proving that you’re good enough to trying to prove that you’re better, and that’s a never-ending, all-consuming fight. You start to want to see others trip up or fail to feel better about yourself. When your measuring stick is “proving that you’re good enough,’’ you’ll endlessly chase external validation.

This “why” is bad. Starting a company for external validation is running scared. Upgrade your mindset to one where you do things for the right reasons. Love the problem that you’re tackling and the process of tackling it. Celebrate others’ successes. When it’s time for you to celebrate your own success, it’ll be that much more meaningful. Think about growing the pie rather than making sure you get your slice of it. Be inspired so you can inspire. Similar to running, others may not be able to tell the difference between founders doing it for the wrong reasons vs. the right reasons. But it’ll matter during the lowest valleys. I think those that are doing it for the right reasons will tend to make it through the dip3 more often. So make sure you’re starting a company for the right reasons— that your “why” is something you can embrace through the suckiest of times. Because even though life is too long to outrun negativity, it’s too short not to run or work on things with joy and passion. Every step you take for the wrong reason is a step you’ll need to retrace to get back to the path of the right reasons.

To be sure, I’m not advocating that we all hold hands to cross the finish line or all toss our laptops and desks into a fire pit and dance around it in a kumbaya circle. It doesn’t mean that you don’t run and run your startup with anything less than a Mamba Mentality4. But you respect the hell out of the game and your fellow players, compete fiercely for the right reasons, and hug and high five everyone afterward. And when your “why” feels like it’s been fulfilled or if life cuts your process short, you can walk away knowing that you put in all that work for the right reasons, regardless of the results.

Thanks to Ricky Yean for reading drafts of this post.


Thanks for reading!
If you enjoyed this post, check out my latest post: How DFS, poker, basketball, Starcraft and strong opinions, weakly held (SOWH) can help your startup:
The central thesis of Strong Opinions, Weakly Held (SOWH) is that action is usually the best way to gain more information, and action based upon a strong opinion brings about the best information.
Read more →
Or subscribe to get notified of new posts: