George Tang was one of my best friends. I learned so much from him, and am still learning from him, years after he passed away. I originally wrote this down to speak at George’s memorial service back in January 2014. This is dedicated to you, George. 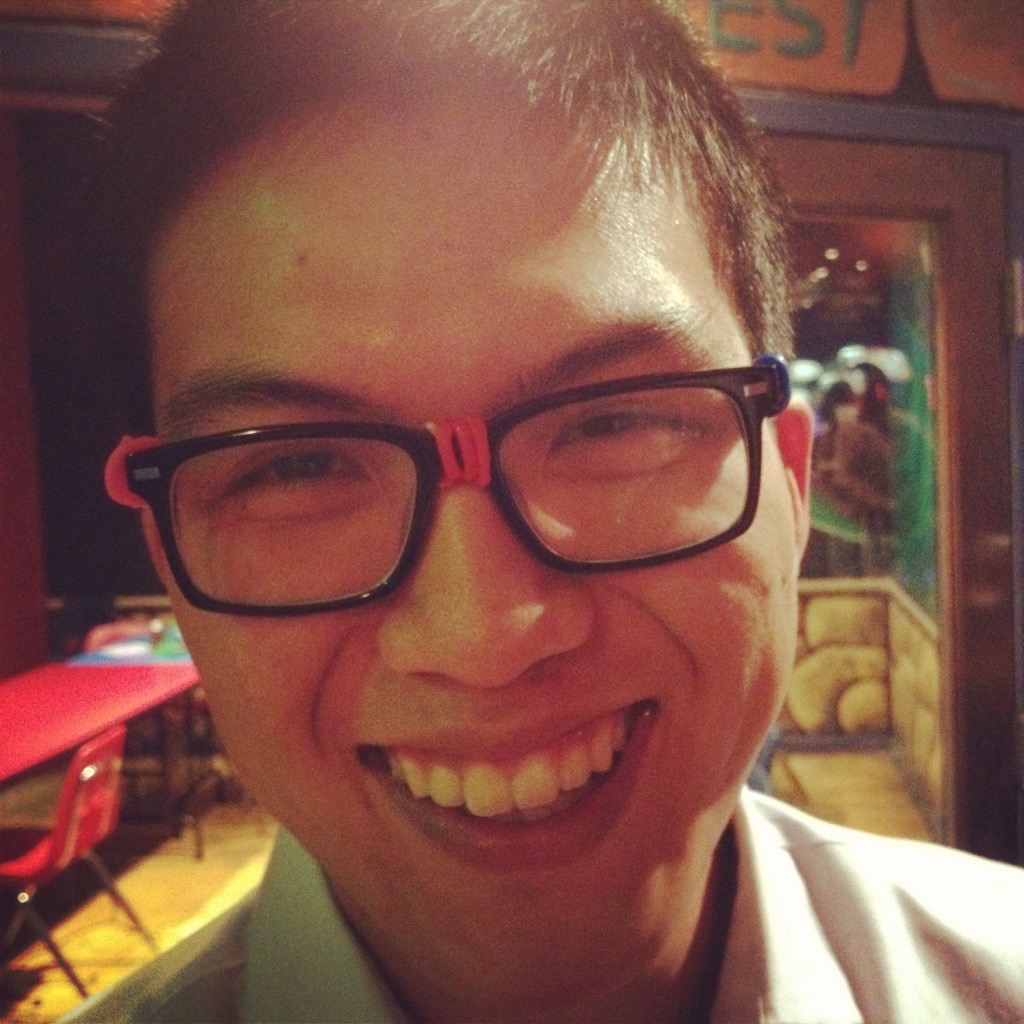 George making an adventure out of breaking his glasses at Laser Tag rubber-banding them back together, 2012

Hey everyone, I’m David. I first met George about four or five years ago when we were part of a student group at Stanford, and lived with him after graduation for two years.

As we’ve all been sharing memories of George, I’ve really struggled to try to pick the qualities I admired most about him – there were so many. I settled on two things: the first was definitely his enthusiasm for everything he did in life, big or small. The second quality I can only describe as his “IDGAF” attitude: it wasn’t so much that he didn’t actually give any f*cks, but more so that he just went about everything with a child-like lightheartedness, fearlessness, and courage while barreling through life heedless of obstacles or conventional thinking.

George’s smile and unbridled enthusiasm turned the mundane into the memorable, the everyday into the epic. George always lived in the moment and genuinely tried to love each and every second. Even if I couldn’t appreciate something the way he did, I grew to love it as well because his excitement was just that contagious. One time on the way back from the bathroom in Vegas, George grabbed me and screamed “DUDE DID YOU SEE J COLE WALKING FROM THE BATHROOM?” I in fact hadn’t seen anyone that looked like the famous rapper and was generally pretty skeptical and ambivalent, but when George started telling all of our friends that we saw J Cole, his enthusiasm just overwhelmed me and actually convinced me not only that he must have seen him, but also into believing that I in fact had seen J Cole too and I got super excited about it. When we later saw J Cole in concert, we agreed that this was definitely our second time seeing him.

George was a daily inspiration: there didn’t seem to be much he was afraid of. George didn’t care that he wasn’t the biggest person on the basketball court or even that he wasn’t great at dribbling—he would drive down the lane anyway. He was fearless when raising with hands like 3-7off at the poker table. Fearless in how he just went up to strangers with that smile of his and treated them like his best friend. He always pushed the limits: of conventional thinking, of how far past the expiration date it was okay to eat something out of our fridge at home, of how much he could get out of life.

It’s no wonder he was so amazing at the poker table: he was always all-in on life, and I loved that about him. Even when he was busy or stressed out, he would take time to enjoy the things he loved and the people he loved being with. But sometimes I wonder how George got it all done— run Kitchit, be an amazing boyfriend to Li, be a great friend to so many, clean up in his weekly poker games, take up new hobbies like salsa, and still find time to watch League of Legends games, share Reddit stories and Quora posts, and talk to all of us online. Thinking back, I can see some places where he might have made up time. During some of the countless all-night poker sessions at casinos, George would bring his iPad and read Game of Thrones or catch up on Reddit while still managing to take everyone’s money and make friends with everyone that he won money from at the table.

Tying together making up time and pushing boundaries, I think most of us accept that using your phone or maybe your tablet in the restroom is okay, given that you put it on silent. George on the other hand would casually unplug his computer from his desk and walk over to the bathroom with his laptop and headphones, blast a Kanye West song, come back 15 minutes later and sit back down like nothing had happened. This made for some funny moments in public bathrooms when I’d hear typing in a bathroom… “George?” Lots of programmers joke about writing shit code - George literally did it, and he was proud of it. Everyone, myself included, would give him shit for this, but he would always just ask “Why, what’s wrong with that, bruh?” as if it was the most normal thing in the world. I loved that about him.

One of the things I used to look forward to the most was asking George how he fared at the poker table when we left a game or left the casino. I could never tell from looking because he always had a huge grin regardless. On the rare occasions when he’d lose, he usually had some epic stories about hands, and he would have great stories about all the new friends he made at the table. He didn’t lose very often, but when he did, I don’t think anyone else could have a huge grin and talk so enthusiastically about how someone outplayed him in a several thousand dollar hand. But much, much more often, he would say “I crushed it”, “I crushed face”, or some combination of that. He loved saying the word CRUSHED with a huge smile. Well George, you CRUSHED LIFE. CRUSHED life and all the obstacles in your way, whether or not you paid any attention to them, and helped all the people you love CRUSH life as well.

I’ll say it: it’s not fair that we lost George so early. He was too young, too beloved by too many, had too much love left to give and too much enthusiasm left to offer the world. It sucks. It makes me think the world is stupid and senseless. But if George were here, I know what he’d say. He would simply smile and “It’s okay.” And like all the times I missed shots on the basketball court, lost a poker hand, or went to him when something bad happened, George would smile and say “Dude, it’s okay.” It’s not about the outcome, not about how the cards fall, not about whether the shots fall, but about having your head and heart in the right place and playing the hand the right way. And George, you showed us how to play LIFE the right way, and through our memories, you’ll forever keep showing us.