Planning to run quite a few races in 2019 including the Boston Marathon, Chicago Marathon, and New York Marathon. Hopefully I’ll see you at some of them! Hoping to do a better job of writing up notes, mostly for myself to reference in the future, and will probably throw some of those notes up here. Hoping to clean these up at some point.

Wind/rain ended up not being nearly as bad as initially feared— just had parts of two laps that felt like a slog cuz of the rain, and the section after the bridge to the aid station was super windy each time, but it was otherwise okay (once your shoes and socks are wet, the rain can’t really do much more to you).

First couple miles were over really rocky/slow terrain, so I stayed pretty far behind the lead runner, Erik, for that section and just tried to keep it nice and smooth behind Todd. Hung back a bit behind Todd and then behind Curt after he passed me on the bridge for the first lap. Saw my pace start to dip slightly above 7 and started to worry that I’d need to make a pit stop super early cuz my stomach wasn’t feeling great, but my stomach just magically settled and all the discomfort went away after I pulled into the aid station after the 1st loop.

Once the stomach settled down, I was able to settle into a comfortable pace and felt great. Ran with Todd for parts of the 2nd and 3rd laps and still felt pretty good, so started really moving the 4th lap. Legs were starting to feel pretty heavy about halfway through the 4th loop and I thought I had maybe started speeding up too soon when all of a sudden I saw a familiar PamaKids jersey for the first time since the first few miles. Exchanged a few words of encouragement with Erik, and then took off way too fast once I went in the lead (clocked ~6:20 for that mile). Settled back down and just tried to stay smooth. Right foot started really hurting with ~8 miles to go, which worried me since that’s my foot that had bad PF and kept me out for 2+ months only a few months ago. But this pain was further up the foot, so I figured that it was just the rocky terrain and new shoes: I broke in the Terra Kigers a little bit the past week, but I’m never going to run a long race as my first race in new shoes again. Pain in my right foot pretty much lasted the entire last 2 laps, but I just tried to focus on breathing and saying hi to 50M runners and 50k runners on earlier loops.

Pretty consistently ran the front half of each lap a good ~10-15s/mile faster because it was paved and way, way more runnable than the rocky trail part. Glad I stuck with that because trying to speed up on the rocky parts would have probably come back to hurt me.

Gu before and every 3 miles (total of 10 gus, mostly Roctane and other high caffeine ones). Had water or nuun at every aid station stop. Had sips of Dr. Pepper at a couple of the aid stations and some really gross, bitter nuun (maybe grapefruit?) that I thought was water both times. Had a single potato chip at the last two aid stations. Had more than my usual oatmeal and peanut butter before—didn’t have honey so had an extra spoonful of PB. Also didn’t have coffee ☕️ for the first time in a while before a race cuz I didn’t have easy access to any, so that might have been why my stomach felt a little weird at the beginning. 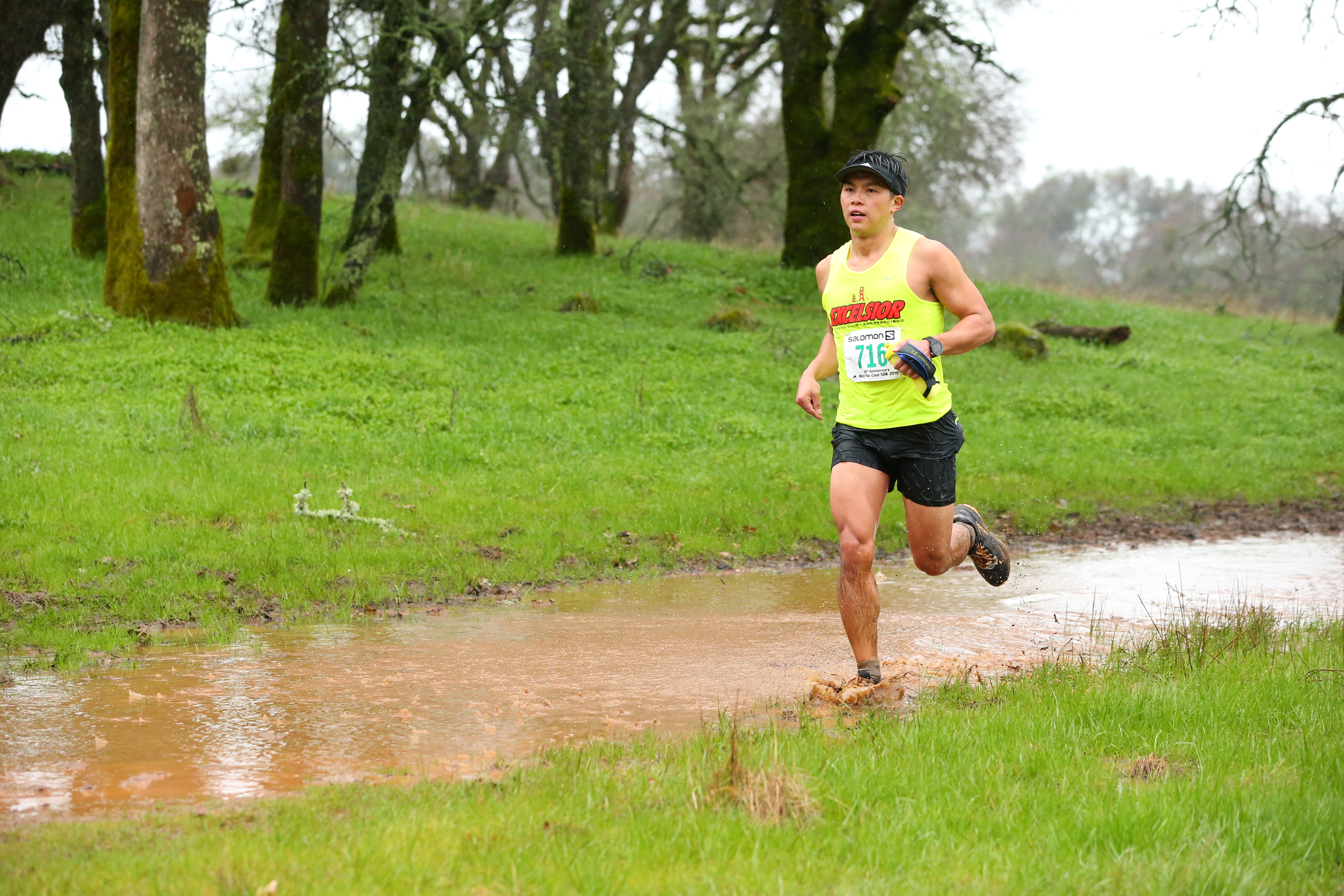 It was muddy most of the way...

I’m a big fan of setting A, B and C goals for races, where A goals are if you have a perfect day and everything goes your way, B goals are a reflection of something challenging but within your reach, and C goals are ones to fall back on that still leave you feeling good. Going into this race and knowing the conditions out there, I didn’t want to just set time-based goals, so I added A’ and B’ goals as well. 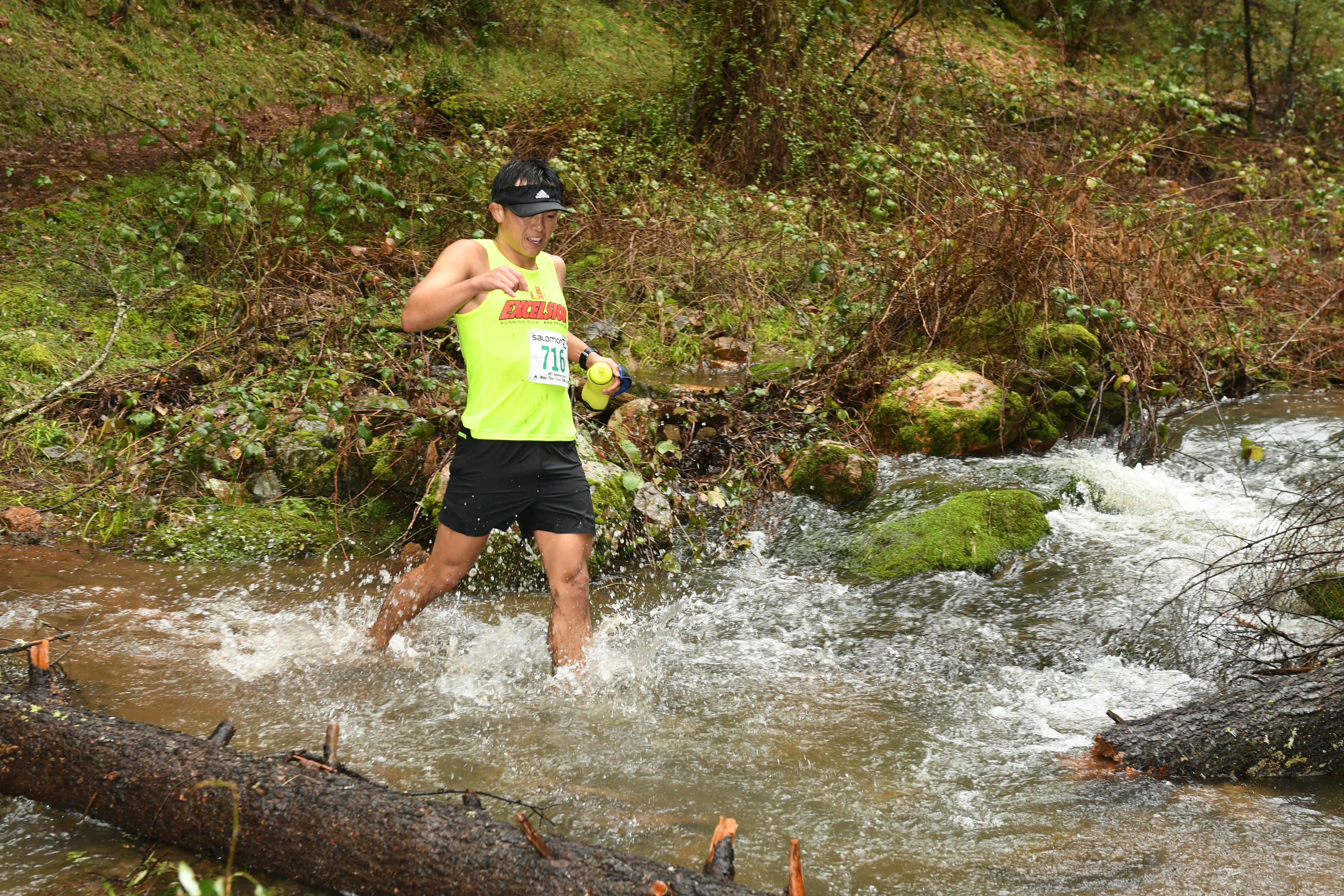 There were quite a few creek (more like river) crossings. Def haven't ever practiced these before

Forgot to train for swimming… super wet and muddy out there, but wow it was gorgeous. Managed to only slip and fall twice… and barely avoided falling at one of the creek crossings… 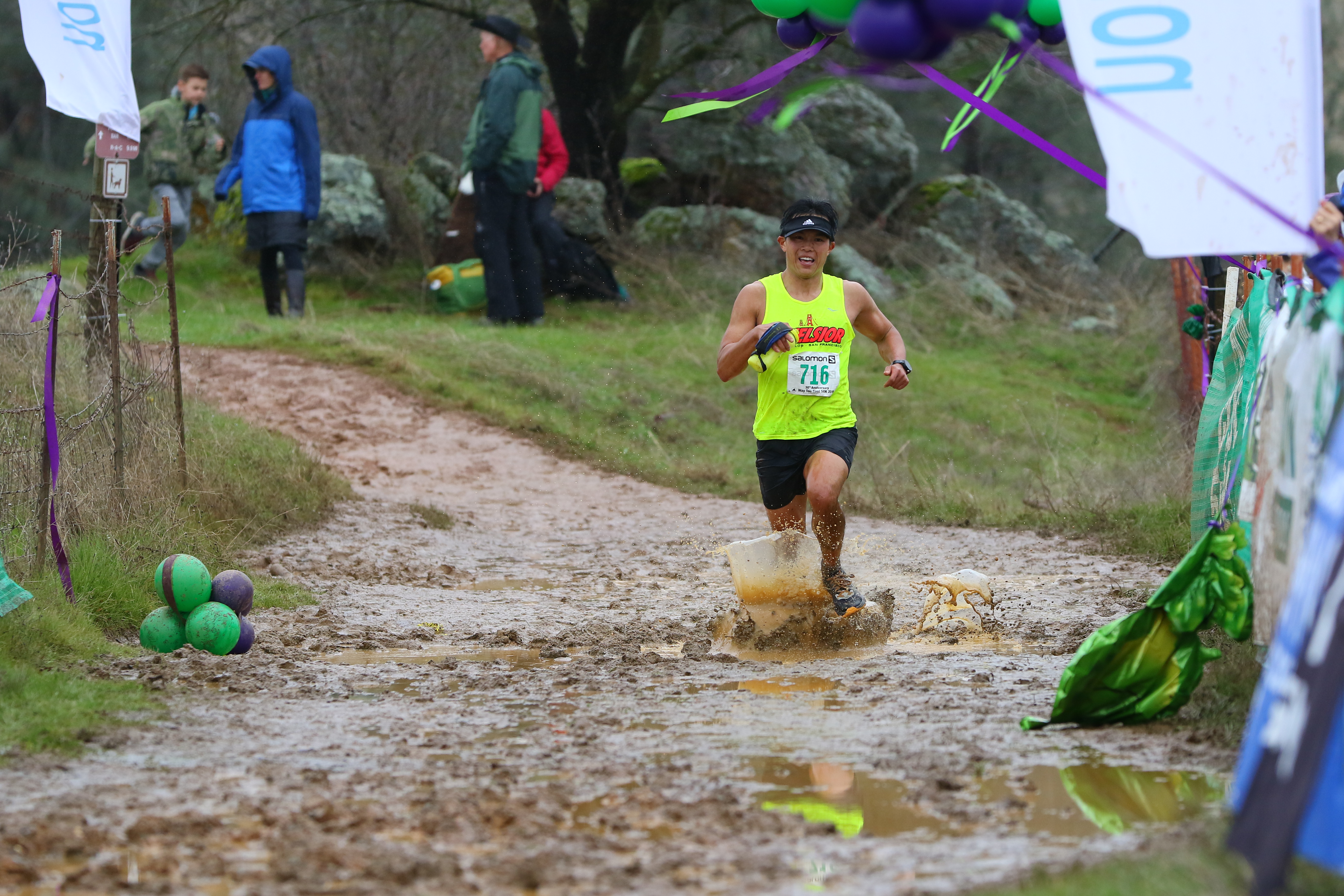 After a while, you realized that there's no going around, and that the best way is through

Was super pumped to get into Way Too Cool via some extra spots they opened up last minute after the lottery closed. It’s one of the largest trail 50ks in the country, with over 800 registered, runs along part of the Western States course and has a reputation for being muddy. With the crazy rain the few weeks leading up to the race and rain forecasted for most of the race, I mentally prepared for a wet and wild slog fest. Even given that, I still wasn’t really ready for what these 31.1 miles had in store for all of us. This was tough, tough, tough. About 5 miles in after a few creek (more like river) crossings, I thought about throwing in the towel. I kept slipping in mud, misjudging where to step and sinking into ankle deep puddles, was getting passed by runners, and was way off even the revised conservative pace I had in mind given the conditions. Luckily just before mile 8, we hit the first patch of runnable trail and came back through the starting area where they announced every runner passing through. Hearing “David Tran (slightly mispronounced but that’s okay) from San Francisco”, I tried to smile for the first time during the race, and just tried to keep up a smile as much as I could the rest of the way. A lot of miles 8-26 actually ended up being surprisingly runnable. Some of those miles of downhill single track and the views of the river were 😍. Congrats to the 621 other finished who endured these crazy conditions, and big thanks to the 200+ volunteers (esp. the ones who made the 🐸 cupcakes and fed everyone warm soup after). 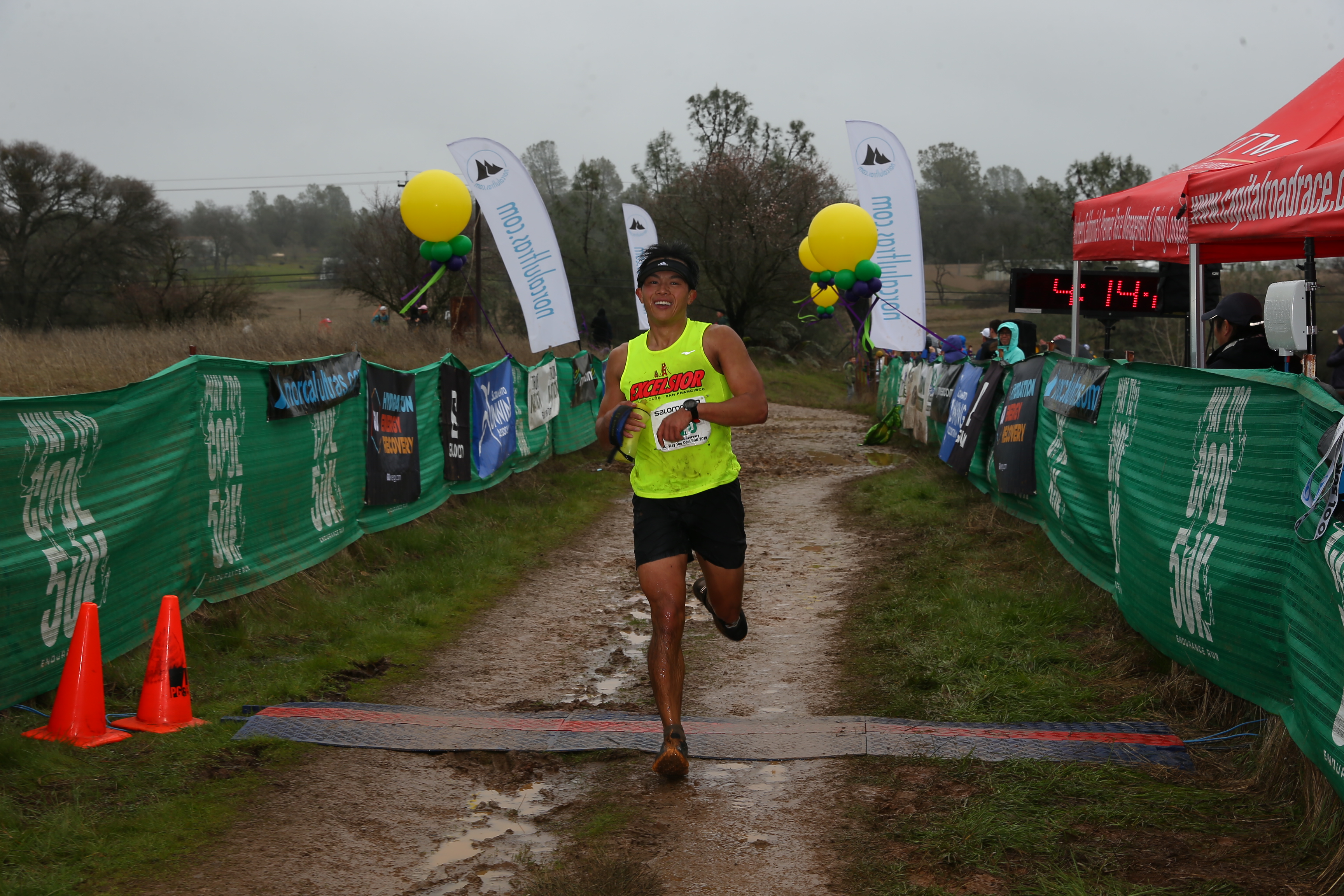 Just tried to smile as often as I could

The usual 80g of oatmeal+ spoonful of PB + honey + blueberries, a banana and coffee before the race. Accidentally thought the Gu electrolyte tablets they gave at packet pickup were meant to be dissolved like Nuun tablets and threw them in my handheld before realizing my mistake… so I had very fizzy water gradually as my handheld got shaken up and dissolved the tablets. Still had intended effect I suppose. Took a Gu (mostly roctanes or ones with caffeine) right before + one every ~3 mi and towards the end, even took them ~2 miles apart during really hilly sections, for a total of ~ 12 Gus + a few potato chips, one gu energy chew and a half dixie cup of gingerale. I drank probably ~50-60 oz of fluids over the course of the race. Felt pretty good throughout. This is a LOT more calories than it seems like any other runner takes, but my stomach seems to be okay with it the last few times I’ve done this (and all the races have been in relatively cold weather).

Another wet and sloppy mudfest! The wind and sideways rain/hail at the top def made me regret running in a singlet just a little bit…Legs still not fully back yet after WTC and didn’t quite have the bounce for the climbs. David L and I agreed the conditions for some of these trails were worse than WTC even, although they mentally felt better.

2nd official finisher after Henry. Was in 4th most of the race, but Jose in 1st missed one of the loops and Pete got sent onto the 50k course 😞

Markings were kind of confusing at the two loops where the 30k and 50k split off. Stopped for 2 minutes at the aid station while one of the volunteers showed me the course on her phone, so was able to go back and do the loop I missed. I ended up with the right distance, although I wasn’t sure if I did the loops in the right order (it looks like I did?). Lots of confusion over wristbands, and poor Pete got sent off onto the 50k course, and they ended up having to create a 30k and a 30k “altered course”/fun run for those who missed one of the loops.

Nutrition notes: The usual oatmeal+honey+PB breakfast. Took a Gu 10 minutes for the start of the race. Tried Maurten for the first time! Put a drink mix 160 in my handheld and really liked the 100 gel at mile 3. Took Gu Roctanes at mile 6, ~13 for a total of ~560 calories during the race. Felt pretty good throughout. Would have taken a gu at 9 but literally couldn’t feel my hands.

May 26: Excelsior Reach for a Star 5K